For members of the news media

TACOMA, Wash.—Department of Health (DOH) has received positive results for West Nile virus from a routine mosquito sampling at Gog-le-hi-te Wetlands near the Port of Tacoma. This is the first detection of the virus in mosquitoes west of the Cascades. Mosquito season usually ends in mid-September.

“People should assume West Nile Virus infection is possible in Pierce County and take steps to prevent breeding mosquitoes and avoid mosquito bites,” said Nigel Turner, director of the Communicable Disease division. “Most importantly, know when to get care if you have been bitten,” he said.

Who’s most at risk for West Nile Virus?

Most people exposed don’t get sick, but it only takes one bite to acquire the virus form an infected mosquito. But less than 1 percent of people infected with the virus will develop severe illness. Some are at higher risk of severe disease, including people 60 years old or older, those with compromised immune systems or underlying medical conditions. 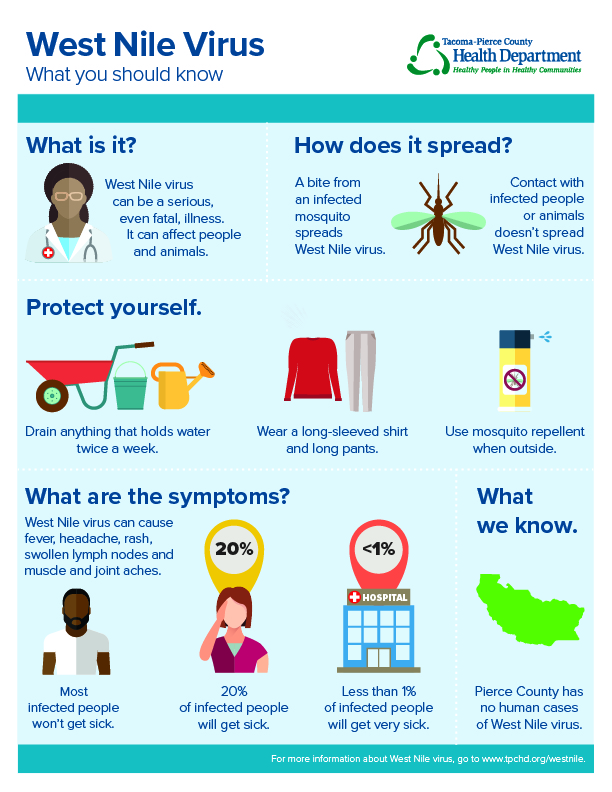 What are the symptoms?

Health officials have not seen any cases of West Nile virus in Pierce County among people, birds or horses. West Nile activity typically shows up early to mid-August. People should take steps to control mosquito populations and prevent exposure to bites.

You can take simple steps to avoid mosquito bites and reduce mosquito breeding sites around your home.

“Even though it shows up sporadically, we believe increased testing would likely reveal more cases of West Nile virus,” said Turner.

DOH’s maps and statistics show where West Nile virus is elsewhere in the state. Last year, nearly every state and the District of Columbia reported West Nile virus infections in people, birds or mosquitoes. This year, Washington has seen no human WNV cases. Nationally, 231 people have had the virus and 8 have died from it.

No vaccine is available for humans, but there is one for horses. About 1 in 3 horses that become ill with the virus will die. One horse in the state had a confirmed case of WNV in 2018, in Grant County. Talk to your equine veterinarian if you have questions about the West Nile virus vaccine. Get more information at the WSDA website.

If you find a dead bird, be aware some birds may die from West Nile virus. Don’t handle dead birds with your bare hands. Find information about dead birds, West Nile virus prevention and mosquito repellents at www.tpchd.org/westnile.

Sign up to get news releases in your inbox.