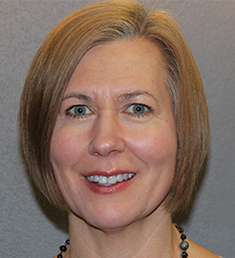 Norovirus is highly contagious and more common during cold weather months. The recent El Toro outbreaks were a timely reminder that the virus can affect many people.

Because of the large drop in case reporting, this is our last regular update.

To explain more about the outbreaks and norovirus in general, we talked to Environmental Health Supervisor Christina Sherman from our food & community safety program.

You identified about 540 sick people from this outbreak. Is that number of cases normal?

Outbreaks can last a few days, a few weeks, or a few months. This a large number of cases for us, but we know cases of norovirus typically go unreported. And likely, the high number reflects secondary cases—people who became ill from eating at the restaurant, then went home and infected family members. It’s highly contagious. People will get norovirus an average of five times in their lives and not necessarily realize what it is—and they will probably not report it to the health department.

Norovirus outbreaks typically have greater numbers of cases than other types of outbreaks because of the low number of virus particles needed to cause infection and the rapid person-to-person transmission. This outbreak had much higher numbers than usual because:

Other restaurants have had outbreaks. Why did the Health Department share so much information about this one?

Last summer, we started the practice of listing on our website when we close a food service establishment for 24 hours because of food safety violations or other health threats. We also looked for other ways to be more transparent with public health information.

Our new website provides features like blogging to update the public on important issues like a foodborne illness outbreak—and to update the status in real time. It’s another tool in our public information toolbox that also promotes more public engagement with the information we share. Moving forward, we will use our blog to share information during incidents like this—as well as plenty of good news public health stories.

Would a restaurant rating system have prevented or lessened the outbreak?

It’s difficult to say what effect a grading system would have had during this outbreak. The grades would have been based on inspections, which are snapshots of an establishment’s performance on that particular day. Our inspectors can only cite food safety violations they observe during a particular inspection.

In the case of the El Toro Restaurants, both received 65 critical points—not a passing score—during their last routine inspections, but they passed their follow up inspections. (See the two-year inspection history for the Tacoma El Toro and University Place El Toro.) On the other hand, many restaurants can pass their inspections then go on to have a foodborne illness outbreak. Conditions that lead to an outbreak—for example, food workers handling ready to eat food with their bare hands—might not be present during the inspection.

If norovirus can live on surfaces for up to two weeks, what good is it to clean and sanitize?

How can you determine norovirus as the source of illness if you don’t test for it?

We often are not able to confirm norovirus with a lab test during the early phase of an outbreak. We follow the Centers for Disease Control and Prevention recommendation to use the Kaplan Criteria to identify norovirus outbreaks. We consider the symptoms of the virus (nausea, vomiting, stomach cramping, diarrhea, fever, and headache), and when people start showing those symptoms. As an outbreak continues, we sometimes get laboratory confirmation of the illness, as we did in this recent outbreak.

How can someone spread norovirus while not showing symptoms?

People exposed to norovirus but not showing symptoms can spread it during the incubation phase. That means they are spreading the virus for one to two days before they themselves become sick. That is why it is so important for everyone to wash their hands often. For food workers, it is especially important not to touch ready to eat foods with their bare hands.

How do you pinpoint the source of a norovirus outbreak—or any foodborne illness?

We rely on people who have become sick to report their illness to us. For an outbreak at a food establishment, we look for two or more reports:

We match these criteria to what we know about different foodborne pathogens. In this case, they matched norovirus and the restaurants were the only thing all the sick people had in common. Then we investigate if any employees were sick, what tasks they performed, and what foods the sick people ate.

Food workers should always stay home when they’re sick. What if they can’t miss work without facing financial hardship?

On Jan. 1, the state’s new Paid Sick Leave Law took effect. The law requires employers provide their employees with paid time off to take care of their health. Learn more about paid sick leave on the Labor and Industries website.

Because norovirus and the flu are in circulation, we want everyone to take preventative steps to stay healthy and keep those around you from getting sick. Wash your hands often, cover your coughs and sneezes, and stay home if you’re sick. Learn more about norovirus, the flu, and handwashing. 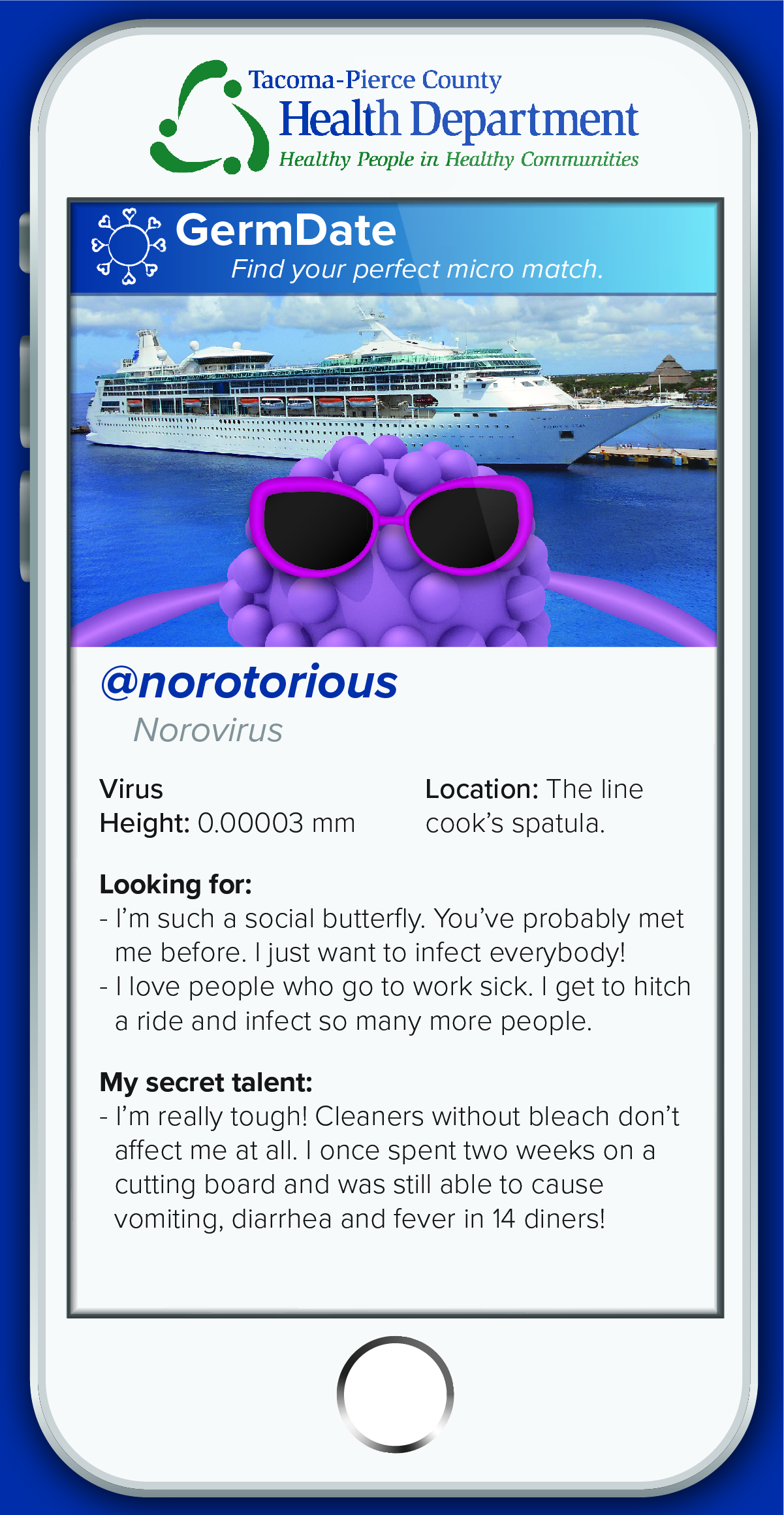 Last September we introduced our GermDate dating profiles. We used humor to educate the public about foodborne illness for Food Safety Month. Norovirus was among them. Check out the profile to see how to avoid this nasty bug and learn more on our norovirus page.

The Health Department allowed the University Place El Toro Restaurant to reopen this morning after a thorough cleaning and sanitizing. This follows a suspected norovirus outbreak that made 10-15 people sick. We don’t yet have an exact number because we have not interviewed all the people who have made illness reports. We continue to receive additional illness reports.

We have confirmed norovirus as the cause of illnesses at the El Toro Restaurant in Tacoma’s Westgate neighborhood. We received a positive test result from a private laboratory today for a customer who ate there between Dec. 31 and Jan. 8. Currently 391 cases are connected to the Tacoma location.

The Health Department is working with El Toro to identify the most likely source of norovirus. Through interviews with restaurant staff and customers who got sick, we look for food they handled or ate and areas of contact they have in common.

We know two staff members at the Tacoma location worked while ill during the time customers there dined and later got sick. It’s still unclear if the outbreaks at the two locations are connected. Because of the nature of norovirus outbreaks, we may never know the exact affected items that caused illness. We know all the cases have dining at the El Toro Restaurants in common.

Each restaurant makes everything in-house. They make their own salsa from scratch.

For restaurant closures of this type, we always schedule an educational visit where all employees, management, and owners review food safety practices and procedures. We also follow up with an inspection after the educational visit.

We investigate every foodborne illness complaint. If you believe you ate at a food establishment and got sick, contact the Health Department at food@tpchd.org, report online at www.tpchd.org/reportfoodborneillness, or call (253) 798-4712.

Tacoma-Pierce County Health Department has now identified 101 suspected norovirus cases from the El Toro Restaurant outbreak in Tacoma. Food program staff learned of the additional cases when they interviewed 41 customers who reported getting sick at the restaurant between Dec. 31 and Jan. 8. We continue to receive more illness reports.

We interview everyone who makes a report. If you ate at El Toro and became ill, contact the Health Department at food@ tpchd.org or www.tpchd.org/reportfoodborneillness.

Look for another update to this blog tomorrow.

We interviewed staff members to ensure only well people will return to work.

So far, the Department has received illness reports from 41 El Toro customers whose symptoms are consistent with norovirus. The number will likely increase as the Health Department interviews the initial cases, who may have dined with others.

The Health Department will continue to work with El Toro on additional education measures for safe food handling and what to do when employees are sick.

Washington’s new paid sick leave law makes it possible for food workers to take care of their health and not work while sick. Learn more about paid sick leave on the Labor and Industries website.

The Health Department is working with El Toro Restaurant, 5716 N. 26th St. in Tacoma, on a suspected norovirus outbreak. We have closed the restaurant for at least 24 hours or until thoroughly cleaned and sanitized.

We received three reports of illness from customers, two reports on Jan. 5 and one report today, Jan. 8. Each report had two cases, totaling six ill people so far, all from separate households.

The three ill parties ate at El Toro on Dec. 31, Jan. 1 and 2. All ill cases experienced the onset of symptoms 24-36 hours after eating. Their symptoms lasted between one and half and two days. We suspect Norovirus as the pathogen.

The patrons ate a variety of meals but all had chips and salsa.

So far, we have identified two restaurant staff members who worked while ill during the time our patrons dined at the restaurant and later became ill. The ill employees can return to the food service establishments 48 hours after they become well.

“The virus spreads easily and is environmentally persistent,” said Katie Lott, food program manager. “Norovirus can stay on objects and surfaces and still infect people for days or weeks,” she said.

When a person is infected with norovirus, he or she can spread the virus up to two weeks after recovering. Handwashing and not touching ready to eat food with bare hands is critical to possibly prevent spreading norovirus further.

“It’s very important that food workers stay home when they are sick so they get well—and keep others from getting sick,” said Lott. “With Washington’s new paid sick leave law, food workers don’t have to be penalized financially for taking care of their health.” Learn more about paid sick leave on the Labor and Industries website.

If you ate at El Toro Restaurant and became ill, please call the Health Department at (253) 798-4712 or report online at www.tpchd.org/reportfoodborneillness.